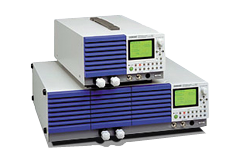 Test modes are constant current, constant resistance, constant voltage, constant power, or a combination of these modes. Current setting resolution can be as low as 0.1mA. Sequence function permits 10 sequence patterns to be saved in the built in memory. Battery cell discharge times from load on to load off can be measured.

The PLZ4W Series has GPIB (SCPI compatible), RS232c and USB as standard.

Equipped with USB (Supplied as standard)